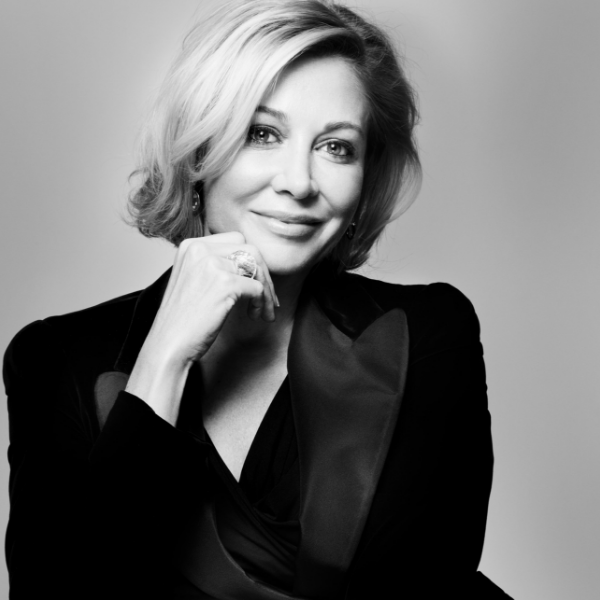 Nadja Swarovski is the first female Member of the Executive Board of Swarovski, the world’s leading crystal manufacturer. The great-great-granddaughter of Daniel Swarovski, founder of the company in 1895, she leads the global brand strategy and communications of a family business that turns over more than €3.2 billion a year.

In the past 20 years, Nadja has driven a dynamic program of collaborations between Swarovski and leading figures in design. Commissioning innovative installations, artworks and products that celebrate crystal, she has positioned Swarovski at the vanguard of creative and lifestyle trends.

From Alexander McQueen to Daniel Libeskind, the relationships she has built in fashion and jewelry, design and architecture, film and art, have established her as one of the world’s leading patrons of creativity. Nadja also oversees Swarovski’s Corporate Social Responsibility initiatives and philanthropic programs, and chairs the Swarovski Foundation.

In fashion, Nadja has built on Swarovski’s legacy of collaborating with the industry’s leading lights and emerging talents, implementing groundbreaking designer support and catwalk initiatives including the Swarovski Collective (founded in 1999), and Runway Rocks (founded in 2003).

In design, Nadja launched Swarovski Crystal Palace in 2002, an initiative that reimagined lighting through collaborations with designers in the medium of crystal. The resulting body of work offered a snapshot of the most exciting creative minds of the modern era, including Zaha Hadid, John Pawson, Tom Dixon, Ross Lovegrove, Arik Levy and Yves Béhar.

Nadja has also strengthened Swarovski’s relationship with the film industry through partnerships with costume and set designers. Swarovski crystals have been featured in movies including The Young Victoria, Black Swan and Skyfall. In the music industry, she has overseen collaborations with costume designers for performers such as Beyoncé, Taylor Swift, Jennifer Lopez and Madonna.

Since 2012 Nadja has led Swarovski’s Corporate Social Responsibility strategy, ensuring that ethical and environmental standards are embedded in the company’s business practices as it pursues its aim of becoming a world leader in sustainable luxury. She is an Ambassador for Women for Women International, and under her leadership, Swarovski has signed up to the UN Women’s Empowerment Principles and the UN Global Compact.

Nadja chairs the Swarovski Foundation, which she established to consolidate the company’s long-term commitment to charitable giving. With a focus on education, the Foundation supports projects that foster creativity and culture, meet social needs and promote wellbeing, and conserve natural resources. The Foundation has supported projects that include the restoration of the San Giorgio statue at the Basilica di San Giorgio Maggiore in Venice, the new Swarovski Foundation Centre for Learning at the Design Museum in London, Women for Women International and Water Aid.

Born in Germany, Nadja is an Austrian and American citizen and was educated in Europe and the US. After graduating from the Southern Methodist University in Dallas in 1992, she completed a graduate course in Fine and Decorative Arts at Sotheby’s in New York. She is currently based in London. In 2016 she was made a Chevalier des Arts et des Lettres, in recognition of Swarovski’s support for the Palace of Versailles.